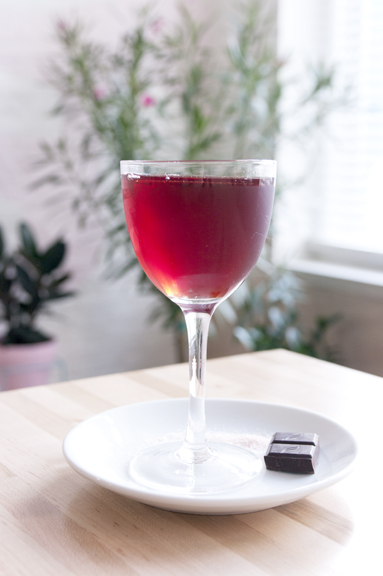 This drink, the Loss Leader, was created by Reed Cahill at Wet City for a weekly event we’ll be having together where we create a special cocktail menu each Monday. The “Loss Leader” name comes from a couple of drinks that Miles Macquarrie did at Kimball House in Atlanta. He dubbed these cocktails “Loss Leaders” due to their use of ingredients that were uncharacteristically expensive or rare for use in cocktails.

With that said, the star of this recipe is Cocchi Barolo Chinato. Cocchi Barolo Chinato is fairly uncommon as a base ingredient, but it offers a lot more complexity than a straightforward rosso vermouth due to the base wine being 100% Nebbiolo from Barolo (one of Reed’s favorite winemaking regions). The Xicaru Mezcal plays really well with the earthy, herbal bitterness of the Cocchi Barolo Chinato, and the Angostura Amaro just amps that up one more notch while providing some additional residual sugar. We served it with a seriously dark chocolate (in this case 85%) since serving chocolate with Barolo Chinato is a fairly common regional practice in Italy after dinner. The cocktail trends a bit sweet, but by no means cloyingly so. The dark bitterness of the chocolate and the slight hint of salt really pairs nicely in a sip-then-bite combo.

Add the mezcal and the Cocchi Barolo Chinato and amaro to your mixing glass. Add ice and stir. Strain ingredients into your cocktail glass. Served up. Plate with dark chocolate and pink Himalayan salt.