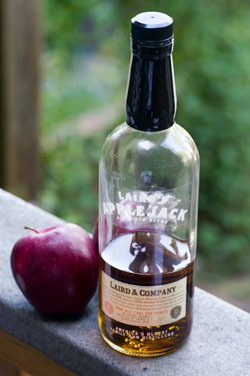 Applejack was the first natively distilled spirit in the United States, or what was the colonies at the time. Believe it or not, in New Jersey, applejack was used as currency to pay road construction crews during the colonial period. There used to be a number of distilleries in New Jersey and  Pennsylvania up until the 1930s, but now there’s only one, Laird & Company. William Laird made his first batch of applejack in 1698 and the recipe was shared with none other than George Washington. This may have something to do with those wooden teeth. Don’t quote me on that though.

Applejack is distilled from a hard apple cider that Mike of Mike’s Hard Lemonade could never touch. The fruit base means it’s a brandy, but to me it tastes more like whiskey. Consider it a harsher version of the French Calvados. However, this can be a good thing when we are mixing cocktails. Applejack will assert itself making the apple notes standout more and that’ll come in handy with the new fall season.